**Controversial statement alert** Mondays are brutally painful. And yet, I find the cloud above my head this morning to be even bigger than the day’s previous. After last night’s game, another week of the NFL has officially come and gone, and the season isn’t getting any younger. Please, allow me to offer my condolences if I just made you cry. I’m hurting too. If it helps, I just had to take my hairdryer to my keyboard to dry up the tears that have been falling. I’m a little worried that I may have broken something, because this is my work computer. I want to care, but when I remember that this season will be over in the blink of an eye, it’s just like… what’s the point?

Another week of football means another week of your real team losing, your fantasy team losing, or the haunting thought of the clock reading “0:00” at the end of the Super Bowl, where your team probably won’t play anyway. Or they’ll choke away a 28-3 lead (man that would suck). The reality of NFL football is harsh; there’s no other way to put it. Fans suffer through countless lows, usually just at the chance to experience a fleeting high or two. We love football, we really do, but sometimes (most of the time?) it just hurts.

Football fans spend the better portion of fall and winter being irrationally furious with players that they don’t know and can’t control. We scream our lungs out, throw anything within arms’ length, and take out our frustration on people who don’t deserve it (eh, sometimes they do). From time to time, when football has me down in the dumps, I like to take a giant step back (like the Jags this year, am I right) and look at the bigger picture.

At the end of the day, these men we curse out in our living rooms, from the stands, or on social media… they’re just people. They get paid a hell of a lot money to do (and often really suck at) their jobs, and probably all have CTE, but they’re just human beings. Growing up, when trying to teach me how to properly treat other kids (still haven’t fully learned tbh), my mom used to say, “Everyone is somebody’s baby.” Some are bigger babies than others (Tom Brady), but they’re all just people with feelings whose parents must be exceptionally proud of them.

So today, on the final week before Christmas break, I thought I’d share a few of the moments you may have missed from Week 15. When I say “moments,” I’m not talking about any fake punts (nice try Hekker) or Philly Specials. What this holiday season needs is a look at those moments, no matter how small, that just make you smile and forget that you’re going to have to buy a new television because you shattered yours earlier after the refs made a bad call (and then it got overturned anyway, but you couldn’t even see it). Let’s take a minute to enjoy the moments that are bigger than the sport itself and humanize the players that we threaten to castrate on a weekly basis.

Nailed it, I am certainly crying. These photos of Philip Rivers and his former running back LaDainian Tomlinson are what the kids call “everything.” Pictured are two stand-up men that fought through a lot together during their time in San Diego (RIP), but never quite reached that pinnacle. Philip’s face is bursting with so much childlike joy that my screen might crack (there I go breaking the work computer again).

LT’s face isn’t visible, but can’t you just feel in your heart how happy he is for Philip, who seems to finally be putting all the pieces together this year? Rivers and the Chargers beat the Chiefs for the first time since 2013 in a dramatic comeback victory on Thursday night, but Philip may have actually forgotten that in this embrace. It feels like the moment where you finally see a friend who you’ve been telling, “OMG we totally have to hang out soon!” for the past five years, and then you finally did and wish you hadn’t put it off for so long. It’s all love between these two, and it always will be.

Spelling tests were my time to shine in grade school, but apparently, I’ve been spelling “man of the people” with way too many letters. There are surprisingly only four: J-u-J-u. Stopping by a tailgate for a burger sounds like a no-brainer to most fans, but when you consider all the divas and egos that exist in professional sports, it’s actually a pretty meaningful thing to do. It’s just not seen very often.

When I was thirteen, and Ron Rivera was the defensive coordinator in San Diego, I saw him in his hotel before a game. Totally freaked out and scared the shit out of him. He gave me a half-smile and an awkward wave, and it was awesome. It’s hard to tell if any young fans were at this tailgate, and I can’t say I’d get that excited at age 24… but let’s be honest — everyone at that tailgate was probably getting wasted while thinking about playing Tom Brady that day. A drunk adult probably gets even more excited about this than a sober kid, so it’s safe to say that this made everyone’s day even before the Steelers beat the Patriots. It really is the little things.

Speaking of things that aren’t little (if you catch my drift)… Our lord and savior Nick Foles was back this week, in case you missed that. We’ve all heard his unbelievable story a million times: ProBowler on the Eagles, cut by the Rams, cut by the Chiefs, almost quits, backup on the Eagles, wins their first ever Super Bowl. Sunday night was just another day in the life for BDN. 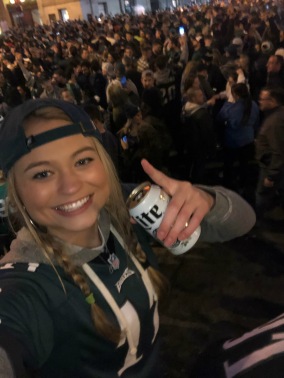 I live in Philadelphia, and hand up — I was in favor of giving Wentz his spot back once he had “recovered.” But as I watched Foles toss bomb after bomb on Sunday and lead the Eagles to an improbable victory, I was taken back to one of the most magical feelings I’ve ever felt as a resident of any town or city. Not because I was thinking about potential playoff parties, but because I put myself in that man’s shoes, and couldn’t imagine how elated he had to have felt afterwards. To just sit on the bench where he was (wrongfully?) placed, say nothing, then come in again to ignite hope throughout an entire city. The world can be a cruel place, but you have to take solace in the moments when good things happen to genuinely good people.

If you aren’t smiling at this picture, you don’t have a soul, never did, and never will. Does this look like the face of the quarterback who just led the Bears to their first NFC North title since 2010? Not really. It looks like a goofy little boy that’s been waiting to wear his ugly sweater to school since September. The simple, yet important things in life.

In his post-game press conference, he made sure to advertise it for NFLshop.com — does anyone else feel like he probably went on there and bought the sweater himself, when he easily could’ve gotten it for free? Mitchell seems to radiate that vibe, and it’s oh so pure. If anyone knows any bad stories that would suggest he is not pure, PLEASE do not tell me. Don’t ruin this moment of bliss. (Also, tell him my DMs are open.)

But seriously, this guy is only a month younger than me, and it would be quite the stretch if I were to be considered an adult. Yet here he stands, a year after being the brunt of loads of criticism for his #2 draft spot, which he couldn’t control. Normal 24-year-olds are trying to figure out autopay and whether they should buy groceries at Target or the ~fancy~ organic store this week (can someone tell me what they’re like?.. love a good vicarious experience). Nationwide criticism? Gonna be a no for me, dawg. Silencing haters, a carefree dopey grin, a monkey off his back, and lights on his Christmas sweater? What dreams are made of. Good for you, Mitchell Trubisky.

2 thoughts on “Tuesday Morning Feels: Football Players are People too”