It is with great excitement and a bit of nervousness that I present to you my first attempt at diving into the wild world of sports blogging. I’ve always loved to write, and I have been obsessed with football (almost too obsessed, some — mainly my mom — would say) for as long as I can remember, so it feels like what should be a pretty solid combination.

When I was twelve years old, I fell in love with LaDainian Tomlinson and the San Diego Chargers, even though I lived in Pennsylvania and had absolutely no connection to them. The only thing I knew about football — at all — was that he was carrying my seventh-grade math class fantasy football team to improbable victories each week. I lived and died by the Chargers growing up (I am now the ripe old age of twenty-four). For years, Philip Rivers lived on my bedroom wall as a Fathead, until recently, when my mom decided that I was “a little too old for this” and it’s “kind of weird” and that I “don’t even live there anymore.” That being said, writing a blog about my never-ending love for Philip, who is still out there leading second-half comebacks with the excitement of a doe-eyed rookie, felt appropriate.

The title says it all, but in case you need further convincing, I’d love nothing more than to explain why Philip Rivers deserves to (at least attend) a Super Bowl… and no, I don’t mean as a spectator. Although, this does pose the question — how would Mrs. Rivers corral nine kids (or more, when the time comes) at the country’s biggest sporting spectacle and also try to watch her husband play? I’m out on that one if I’m her. I get the vibe that their family tries to get by without a nanny and do it all on their own. She’d have to limit it to maybe four kids and set up some sort of raffle ticket situation. Could get dicey. The blonde fellow in the middle looks innocent, but I’m not so sure he’s not throwing haymakers when he finds out he’s watching the Super Bowl from Nana’s couch with a bowl of burnt popcorn and unidentifiable gummy candy.

Anyway, let’s get into the details. I’m not here to break down X’s and O’s or drown you in pointless stats. I’m just going to hit you with some cold, hard Philip (please note, only one “l” in his name, thank you) Rivers facts. 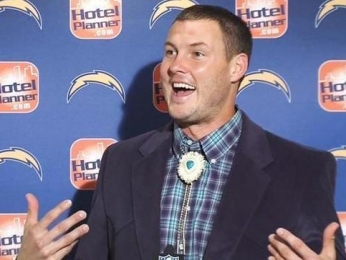 First of all, have you ever seen anyone rock a bolo tie quite like this guy? Or a bolo tie rocked in general, for that matter? The man knows what he likes and he’s not afraid to be bold with his fashion choices. It’s admirable, really. People in my office freak out when they see me in jeans or even -gasp- a dress! That’s a bold day for me. We as football fans have been denied the opportunity to see what kind of bolo ties he would flaunt during Super Bowl week, and it’s unfair. I mean, look at his neck. That thing is a STATEMENT piece. Think of the possibilities, people. Ideally, I’d like to see one where the broach is just a giant picture of Keenan Allen’s face. Maybe even some of the actual hairs from his distinguished beard. Thoughts?

We also must consider how exhausted his arm is after all his years of fierce gunslinging and appreciate the torture that he puts himself through with every throw. Anyone who has watched Philip Rivers throw a football knows that his throwing motion is more than just “somewhat” unconventional. It’s this weird, sidearm shove of the ball that doesn’t look like would go for more than five yards, which would be fine if he was Sam Bradford, but these passes are going for sixty yards in the air and his team is paying him to actually participate in games. I despised science class, but I believe this defies the laws of physics.

Look at his face! No one is even touching him — he’s just trying to throw a routine pass. He’s clearly in pain and never says a word because the man is what you find when you look up “toughness” in the dictionary… or on dictionary.com, I guess. That being said, that poor elbow is thirty-seven years old and it’s not getting any younger. It’s time that this elbow hoists a Lombardi and forgets about all the treachery it has been through.

Unfortunately, the Chargers haven’t been playing well until recently, so they haven’t been featured in many primetime games. Subsequently, it has become all too easy to forget the endless entertainment that he has been providing fans for fifteen years in the form of his extremely gif- and meme-able expressions. Sure, he gets a lot of help from his teammates, who have often been masters of orchestrating heart-breaking losses, but no one does it better than him.

Eli Manning runs a close second, but he usually just looks like he can’t figure out who stole his ham sandwich out of the fridge. There’s a complete lack of variety. Philip’s range of emotions is much wider and more representative of the common man, dealing with the ups and downs of life as they come. Some people actually say that the Chargers got the better end of the Eli Manning-Philip Rivers trade, solely because Philip gives us all a lot more content for our Twitter feeds, and as we know, Twitter is everything. Could you imagine the roller coaster ride that Philip’s body language would take us through during a Super Bowl? Spastically running down the field after a win, like a kid who just ate twenty pixie sticks then chugged a Red Bull? (As much as it pains me) the crushing look of defeat, face in his hands, like someone just told him he has to start using birth control? I can’t think of any greater visual treat.

PHILIP RIVERS JUST LOVES FOOTBALL. It’s cliche, but that’s because it’s true. Winning it all in the NFL is pretty damn difficult, but he at least deserves a chance to experience that feeling. The Chargers are on a roll this year, so I ask you to join me in rooting for the most underratedly awesome player in the league. Maybe I’ll even put up a special Super Bowl Fathead in my apartment if he wins it all.