They warn men about the girls with “daddy issues,” and for the longest time, I’ve wondered, “What are those? Do I have them? Is that why I’m still disturbingly single?” Urban Dictionary, who was like a third parent growing up (the only one who taught me any information useful for barely surviving high school) defines “daddy issues” as:

“What a girl has when she is rejected by her father. Often results in her having trouble finding a significant other and trusting people. Girls with Daddy Issues will also sometimes date older men.”

Well yikes, I could surely see how that would turn problematic, but I’ve never dated anyone in their 40’s, despite my aunt’s countless attempts to talk me into it at every holiday gathering. And unless my dad has been covertly lying to me for my whole life or I am completely oblivious (more likely than you’d think), I don’t get the sense that he’s ever outwardly rejected me. At least not in a way that’s negatively affected my dating life… no one to blame but myself there. Nevertheless, there’s something else that’s been brewing all these years…

I won’t make the assumption that all of you have gotten the birds and the bees talk yet, but I’ll keep it simple for those of you who are unfamiliar. Sometimes, when a man and a woman love each other verrry much (and/or just drank too much that night — my 9-year-old brother says hello), they get together and make a baby! The sex of the baby is determined by the father, who passes on either an X chromosome, which results in a female, or a Y, which results in a male.

the thing I resent most about being a girl is that I never had the chance to be a lineman and be told I needed to bulk up #HungerDoesntSeeGender https://t.co/YWhDWMV6Mj

My problem began roughly twenty-five years ago when my loving, yet inconsiderate father gifted me the X instead of the Y. This mistake is often a silly one I make when passing to receivers in Madden, but when we’re talking genetics, it’s wholly unforgivable. I can’t just “quit game” and start over. This is my life. And, you know, YOLO. For as long as I am here on this earth, the restroom lines will span for miles, those extra fifteen pounds won’t magically disappear if I stop drinking alcohol for a week, and worst of all, I’ll never play football.

For awhile I teetered back and forth on whether or not I should let this go, since ~technically~ he didn’t have much of a say in the matter (or he did and I just don’t know because I despised science in school). Excuses. Nevertheless, he is the man who gave me life (s/o to my mom for doing the other 99% of the work), so I decided I was willing to cut him some slack… Until an even more treacherous tale of sabotage began to unravel right before my very eyes. 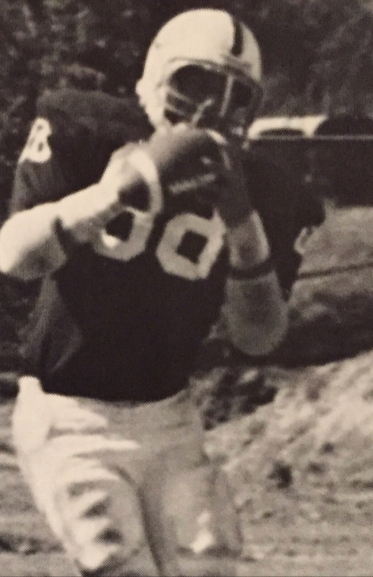 Before I was even a thought in his big brain, my dad was a decorated football player — we’re talking Parade All-American, top tight end recruit in the nation, the whole nine, blah blah blah. But you won’t find him in any NFL almanacs, and you’ve likely never heard of him unless you’ve torn your ACL in the vicinity of York, Pennsylvania over the past thirty years. (Don’t google York, I don’t need you to feel sorry for me. It wasn’t that bad…)

Happy birthday to my dad! I still love him even though he quit college football after being the #1 TE/DE recruit in the country and ruined my life 10 years before I was born. He's the best 😊

Why? He committed to Penn State, then selfishly decommitted, and instead chose to play at Maryland (lol).

Subsequently, Penn State won the National Championship during what would have been his junior year there, and what was my mom’s freshman year in Happy Valley. In true hoes-before-bros fashion, she plays on my side and makes sure to rub it in every fall. Thanks girl.

To make matters worse, he hated playing at Maryland (obviously). He had an offer to transfer to Princeton, but didn’t feel like bullshitting an essay as a formality to get accepted. Thank GOD he didn’t pass along his writing “skills” with that stupid X. I would’ve banged that piece out in two seconds. Back in my heyday, I got recruited to swim at Princeton, but I wanted to go to a school where at least one person cared about the school’s football team. Okay, so maybe I can excuse this one. Maybe.

Post-Maryland, he quit football altogether (the HORROR), transferred to Lafayette, and decided to practice medicine. It sounds quite honorable, if you’re into orthopedic surgeons. I’ve only ever sprained my middle finger so he’s nearly been of no use to me. He did, however, equip me with a fake purple cast once, so that was wildly entertaining for like ten minutes.

Instead of coaching, like his Maryland teammate Frank Reich, or commentating, like his Parade teammate Cris Carter, he made the noble choice to perennially freeze to death on the sidelines of high school football games in tundra-like conditions in case Little Johnny gets turf toe. The nerve.

In his weak defense, sometimes Little Johnny goes to the NFL, and he’s occasionally brought me to meet NFL players at high school all-star games or football camps. Some may view this as impressive. But not me — maybe others, who don’t mourn the void of something greater in their lives.

**Chad Henne asked if I was a swimmer, and said I looked like one. Not sure if this is good or bad, but I feel like it’s good, so I’m gonna brag about about it. I also felt a little awkward wearing a shirt representing the team that mangled his shoulder a few years before this. Oops.

The agony and hardship that this has caused me has been nearly insurmountable. This man looks like a happy-go-lucky meathead, but behind that goofy smile is the mind of a bully. He used to say, “Caroline, you throw the football like a girl.”  With weary eyes and a breaking heart, I’d respond, “But Daddy, I am a girl!” He didn’t want to hear it, even though he gave me that godforsaken X and was the one who bore the blame.

It’s as if he wanted me to stay as far away from college and professional football as possible… to follow his footsteps down a path that I had no desire to tread. But alas, here I am, blogging and tweeting away. Occasionally, I wonder if can I still can spin this in a positive way. The man is my father, after all, and he deserves a lot of praise for putting up with me over the years. Albeit my personality resembles his more than my mother’s, so that’s also his fault… 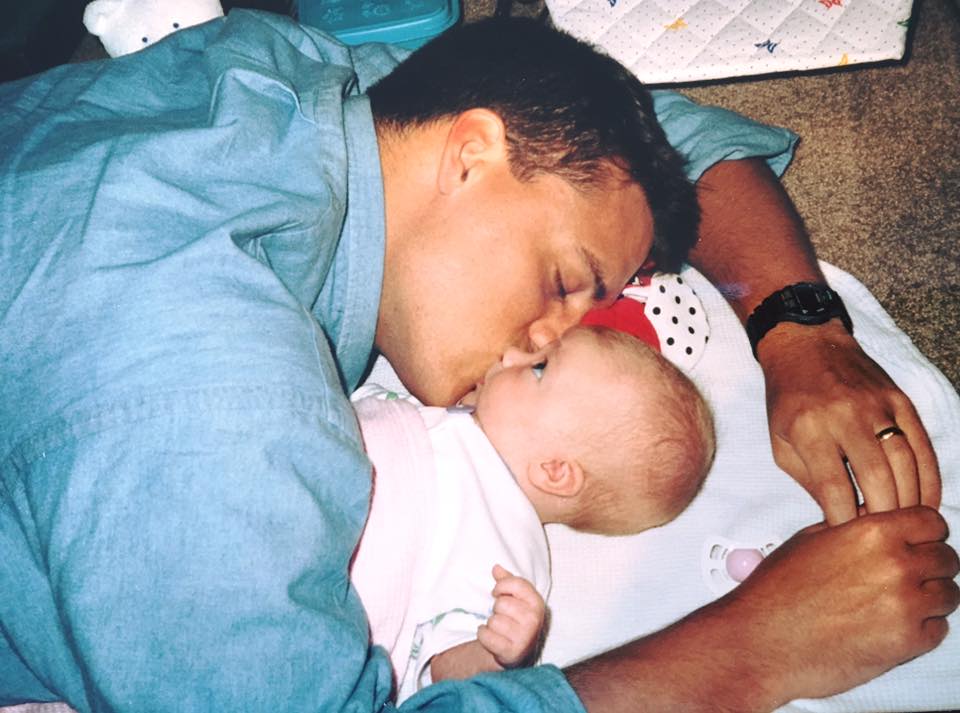 Here’s a man who has tried my whole life, and for most of his, to shield me from what I love. Despite all of his efforts — and they were some valiant efforts — I haven’t let him stop me. My skin is thicker and my love for football is deeper because of it. Maybe I could thank him for this!

…oh, just kidding! I just remembered that his sister ended a six-year relationship with Scott Van Pelt decades ago. Yes, the super famous bald guy on ESPN that you’re thinking of — that one. They broke up right before my parents’ wedding — dad could’ve at least thrown him an invite!

Look at that flowing mane!

Scott probably would’ve been a nice sports media contact to have. If that interests you at all. Which, in my case, you may have noticed that it might. I’m no gambling woman, but if I was, I’d bet my life that this blame also falls squarely on my dad’s shoulders. SVP, if you’re reading this, I’m sorry for the unfortunate series of events that unfolded without my consent, and we can still be friends, if you’d like. I won’t say no. You can come to my wedding. If you’re still around in fifty years.

I love my dad, I really do, but diving into these feelings I’ve been harboring has been quite a roller coaster ride I did not expect to take. What was meant to serve as a “cathartic” public journaling session seems to have had the opposite of its intended effect, and I’m still upset.  Where is my Y chromosome? Where is my easy connection into the sports world?

WHERE IS THE MILLENNIAL ENTITLEMENT THAT I RIGHTLY DESERVE?!

It’s time I admit… I have daddy issues.